Home > Blog > Sober in the City: How I Found a Whole New Sober World in Broadway Sober in the City: How I Found a Whole New Sober World in Broadway

Sobriety Doesn’t Have to Ruin Your Relationship with Music

Back in my party girl days (years ago), I went to a few concerts. Well, dozens. Okay, more like hundreds. I loved getting drunk and singing along with my favourite bands and musicians. I’d think to myself “OMG! Mick Jagger is like, right there!” Or when I was stoned, I’d think “Man… I’m breathing the same air as Dylan.” While my passion has always been rock n’ roll, my taste in live music has ranged from bubblegum pop to intense hip hop. There was just something about being around live music that made me alive. And by “alive,” I mean “intoxicated.” I’d drink before, during, and after each concert. Since the lines for drinks were so long, I’d often order two beers at once, proudly “double fisting.” Depending on what artist I was seeing, I’d throw weed or coke into the mix too. I’d get so drunk and/or high that I could barely remember the actual shows. I’d forget the songs they played, the people I met, and how I got home. Apparently, “feeling alive” meant feeling nothing at all.

To live a sober life, I had to change certain aspects of my lifestyle. Throughout all of these positive changes, something felt like it was missing. Drinking tea, reading books, laying low, and avoiding bars was nice, but I wanted to feel the way I felt when I was at a concert. Ya know, that “aliveness.” That rush of live entertainment. And that’s when I found Broadway.

Many of the things I loved about concerts (live entertainment, flashy performances, elaborate costumes, being in the close vicinity of famous people) were available to me in a brand new way. Shortly after Misery, I saw Blackfoot. OMG! Michelle Williams! Then Fully Committed. OMG! Jesse Tyler Ferguson! I had found my new, safe addiction: live theater.

After seeing a few plays, I was ready to see a musical. Ok, I’m lying. I was actually scared to see a musical (yes, I’m totally serious). Even though I loved The Sound of Music, Grease, and Across the Universe, I didn’t think I was smart enough to follow a live storyline and that randomly broke out into song. Insecurities are soooo fun (not). I eventually got over myself and challenged the voice in my head telling me that I was stupid.

For my birthday a few months ago, my aunt took my roomie and I to see Wicked. I was excited to pop my musical cherry while simultaneously seeing my buddy/ former co-worker Michael playing Fiyero, the male lead. After the show, he gave us a tour backstage. A few weeks later, I saw The Color Purple. Then Kinky Boots. Then School of Rock. And this week, I saw Sunday in the Park with George. OMG! Jake Gyllenhaal! 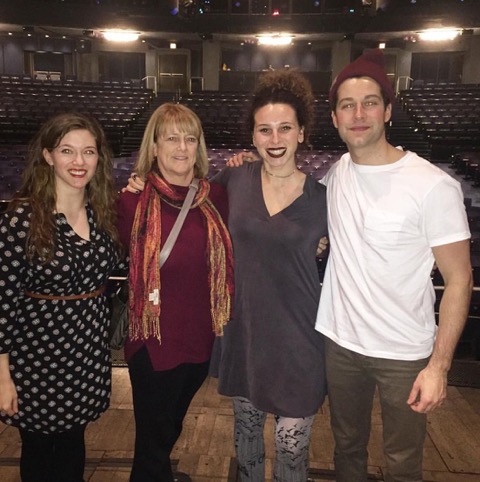 I still go to concerts, just not as much as I used to. It’s hard for me to be in that setting and not feel tempted to drink. I find going to Broadway shows to be safe and relatively trigger-free because it’s a new activity I embraced in my recovery. I don’t have memories of being wasted at a Broadway show; I’ve only known it sober. Nobody is shoving one another to get a better view. Beer isn’t spilled all over me. Joints aren’t being passed around through the audience. At concerts, I’d bond with my friends over shots and beers and screaming the words to songs we loved. At a Broadway show, I bond with friends in silent appreciation of live theater.

The magic created on Broadway also opened my eyes to a world I knew nothing about. Growing up in a small Texas town, theater wasn’t discussed too often. I was in choir in 5th grade and loved it. Then I learned it wasn’t “cool,” so I didn’t pursue it the following year. Kids at school made fun of anyone who was in theater, choir, or band. So instead of doing something that made me happy, I joined the bullies. I just wanted so badly to be part of something.