The words we use shape the way we define ourselves and the world around us.

In many ways, the landscape of 21st century opioid addiction treatment is quite different than it was in the past. We have medication options that help practitioners recognize “detox” is not only unnecessary but often dangerous. The harm reduction movement—which values safety over forced abstinence—is steadily gaining traction across the nation. People with substance use disorders are able to look in the mirror and see the face of a person with a medical condition, instead of the image of “lowlife junkie” that our cultural consciousness has affixed to opioid use—especially IV opioid use—for so long.

But the fight to de-stigmatize drug use and addiction is far from over. Drugs are still heavily criminalized across the United States. People continue to face harsh, forced detoxification in jails—and some are even dying from highly preventable withdrawal complications, like dehydration. Drug court systems and child services agencies continue to prize coerced treatment over compassionate care. Many hospital staff still look down on mothers who give birth while on prescribed methadone or buprenorphine. These are just a few examples of the challenges still faced by those of us who live with opioid use disorders and/or advocate on behalf of those who do. And while a great many of these challenges require systemic, policy-based changes, change also begins in the hearts and minds of regular people. One way to help bring that about comes in the fairly simple format of changing the way we talk about addiction.

I was privileged enough to recently receive a travel scholarship from Northeastern University so that I could attend a meeting in Boston with a group of writers, advocates, doctors, legal professionals, policymakers, and harm reductionists where we discussed the way the dominant narrative of drug use and addiction shapes the very real treatment of people who use drugs or have substance use disorders. One of the terms that was brought up for reform was “medication assisted treatment.”

I was surprised to hear medication assisted treatment (MAT) mentioned as a potentially stigmatizing term. It’s one which is used so often and by so many people, including evidence-based providers, that it never crossed my radar. I’m still not sure whether I’d place it in the same category as terms like “addict,” but the argument is definitely worth consideration.

The general argument, which was put forth at this meeting by Dr. Sarah Wakeman from Massachusetts General Hospital, was that including the word “assisted” promotes an understanding of medications like methadone or buprenorphine as partial treatments for opioid use disorder. Although many people who misuse opioids have co-occurring trauma or mental illness, and can greatly benefit from counseling or other psycho-social interventions, the fact is that methadone and buprenorphine have been shown to reduce opioid-related mortality and complications by 50% or more. They are, inherently, treatments for opioid addiction. Terms like “pharmacotherapy” or “medication treatment” encourage an understanding of these medicines as primary treatment models—which can be enhanced by incorporating other types of treatment, but do not require those other treatments in order to be successful. 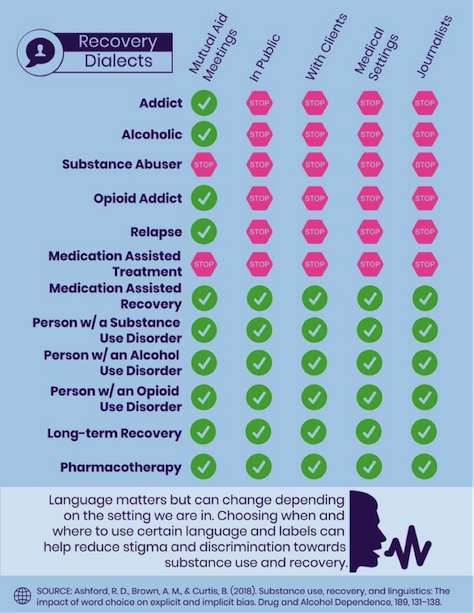 Language guide via The Fix .

“Substance abuse” is a term that is considered outdated, but is still commonly used. There is no longer such a term as “substance abuse disorder;” it was updated in the DSM-V to “substance use disorder.” This is part of a movement away from criminalization of addiction, and toward a public health approach. The word “abuse” is associated with harmful, criminal activities. It has an inherently negative association. One which, as a survivor of physical and sexual abuse, is embedded in my addiction. I began using opiates as a means to self-medication post-traumatic stress disorder that resulted from being abused. This linguistic coupling of the actions that caused my trauma and the actions I took to self-medicate it creates a subtle but harmful association in my mind, and likely in the minds of other abuse survivors. Taking drugs does not put me on the same level as my abuser.

Several recent studies found that the term “substance abuser” created negative associations toward people who engaged in drug misuse. Although drug use and addiction stigma is strong regardless of terminology, it was increased when people were referred to as “substance abusers.”  These findings matter, especially when they relate to a term that is still widely use in clinical practice. Addiction treatment is already rife with stigma. It will be until we end the war on drugs, which creates criminals out of drug users. But that stigma needs to be eliminated in clinical practice. Patients who feel judged and coerced by our treatment providers are more likely to relapse or outright drop out of treatment. Unfortunately, many clinicians still use the terms “substance abuse,” and “substance abuser,” and engage with patients through the same filter of unconscious bias that these terms promote.

“Clean” and “dirty” are so commonly used to describe the state of abstinence-based sobriety or relapse that many people use it without question. I know I did. If I used, and needed to provide a urine sample—that sample was dirty. If I didn’t use, my sample—and self—were “clean.” These words are taken for granted, but when you pause to think about them for a moment, the problem should be obvious: they imply that a person who has used a substance is dirty. This feeds right into the “dirty junkie” or “dirty addict” stereotypes that dehumanize drug users. So, every time we use the words “clean” and “dirty” to describe our state of sobriety—even if we are proudly proclaiming ourselves “clean”—we are promoting a view of drug users as dirty. We are also valuing our own self-worth with the chemicals we do or don’t ingest. And that’s wrong. You are just as worthy of respect and fulfillment high are you are sober.

Another issue with this terminology is that it prioritizes abstinence-based recovery. The way people respond to addiction is inherently individual. As Loretta Finnegan, a renowned addiction-treatment physician and the Executive Officer for the College on Problems of Drug Dependence recently told me during an interview for an article I wrote for The Fix, “in most diseases, there are many ways to treat them.” The same should absolutely be true about addiction. That means that while total abstinence works great for some people, moderating usage works better for others, while cannabis-based therapy works wonders for others. There should be myriad addiction treatment options, and one should not be generally valued above the others. The people who use marijuana or moderate their consumption are no more “dirty” than people who use no drugs at all.

Humans are a storytelling species. The words we use shape the way we define ourselves and the world around us. Small changes in language won’t end the drug war, but they can help shift the dominant narrative about drug use and addiction into one that promotes evidence-based care, medicinal versus law enforcement approaches, and an understanding of the people affected as exactly that: people.

Get online help for addiction with Workit Health. 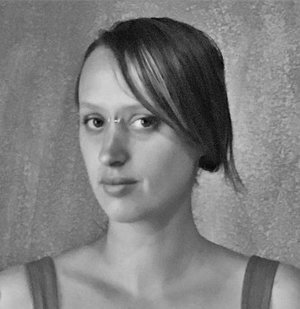 3 Ways to Meditate to Add Mindfulness to Your Recovery

Why Is Meth Left Out of Medication-Assisted Treatment?

What Addiction Treatment Does Medicare Cover?

What to Look For When Choosing Addiction Treatment

Sobriety doesn't mean your life is going to be per

Workit is now accepting some Medicare plans! If yo

Did you know Workit Health has a program to help q

It's important to remember that the good things in