Home > Why Michael Venn Created His Documentary the “The Heroin Effect” 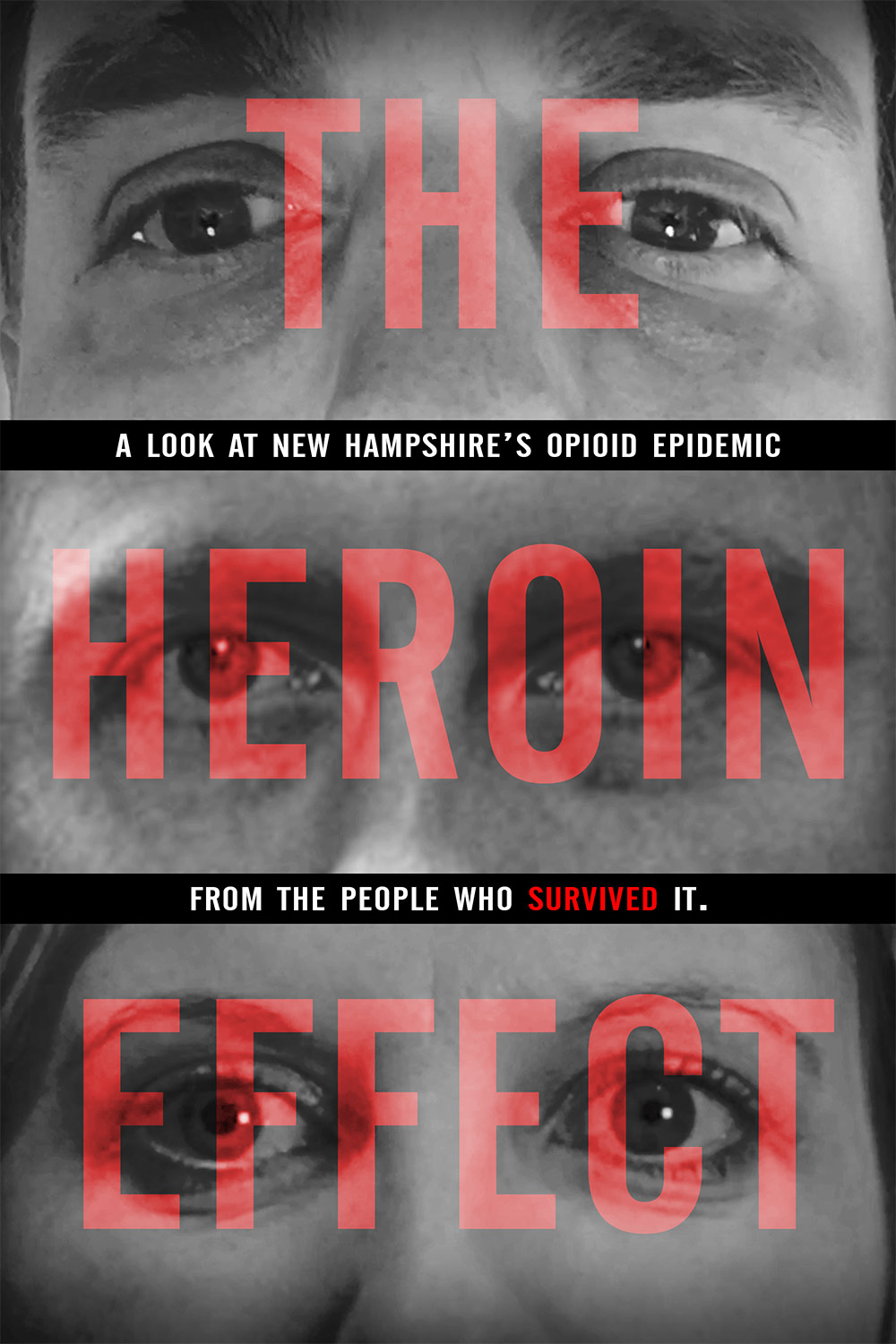 Why Michael Venn Created His Documentary the “The Heroin Effect”

The Heroin Effect documents the opioid crisis’s effects on one New Hampshire community.

I am not an addict. I am not in recovery. I don’t have a personal connection to the opioid crisis, or at least that’s what I thought before the production of The Heroin Effect. Three and a half years ago I started filming a documentary about the opioid epidemic. That process changed not only my perception of addiction as a disease, but it also made me want to create a film that would fight the stigma of addiction for those who watched it as the characters in the film shared their own stories in their own words.

One day in early December of 2015, I went for a walk downtown to get a cup of coffee with my son. While we were at the coffee shop, I noticed that every headline of every newspaper from the New York Times to the Wall Street Journal and every other paper on the rack all read the same thing: Heroin Epidemic, Opiate Crisis, Another Overdose, etc… I looked at my son who was ten years old at the time. As a parent, I saw these headlines differently, and they scared me. They scared me because I’ve been a full time single father since he was an infant. My ex­-wife is an alcoholic and I have personally lived through what addiction can do to a family.

As my son and I walked home from the coffee shop, with the headlines still fresh in my mind, I ran into a friend. He was in his mid 20’s at the time and I hadn’t seen him since he started graduate school, but when we saw each other he stopped to chat and catch up. We made small talk and I mentioned I had heard about his car accident and was glad to see that he was doing well. He asked me if I knew the whole story… I did not, and he proceeded to tell me.

My friend’s response sent me on a journey that planted the seed for the documentary film, The Heroin Effect. He told me point­ blank that he was a heroin addict, that he had shot up and and nodded out while driving on the highway, that he totaled his car and was lucky to be alive. He told me that he was eleven months clean and sober. He had been through a treatment program and was now in recovery and living in a sober house. He was not someone you pictured when a “heroin addict” comes to mind. This was a guy who always looked like he stepped off the cover of GQ magazine, he grew up in a good home, was raised by great parents, and was smart and athletic. He was the guy you wanted your son to grow up to be like, or who you wanted your daughter to date, and he had just told me that he was a heroin addict. When we finished our conversation, we shook hands and I said told him to keep in touch. I was glad to hear that he was doing well and in recovery. I continued my walk home and once I opened the door I grabbed a notebook and wrote the outline for what became the film.

The first thing I wrote was that I wanted to do a film about heroin addiction without showing spoons or needles, or “junkies” scoring dope on the street corner and shooting up in an alleyway. I didn’t want to do the stereotypical “needle porn” salacious film that Hollywood does. That’s the stereotype, and that stereotype helped to perpetuate the shame and stigma associated with heroin addiction. Being a longtime musician, I thought about how much heroin addiction affected some of the musicians that I loved. Whether it was Miles Davis and John Coltrane, The Beatles, The Rolling Stones or Eric Clapton. Sublime, Jane’s Addiction, Nine Inch Nails, or the Red Hot Chili Peppers. During the course of filming The Heroin Effect, we lost musical icons Prince and Tom Petty to overdose and most recently Mac Miller and nearly Demi Lovato. This opioid epidemic has always been with us, but today the rise in overdoses is exacerbated by the over prescribing of opioid painkillers like OxyContin and deaths due to heroin being cut with or entirely replaced by fentanyl.

During the course of filming The Heroin Effect I met a lot of people who struggled with heroin, opiates, alcohol and other drugs. Overwhelmingly, the stories I heard from the 40+ initial interviews I did to start weaving the storyline for the film were always the same. It went one of two ways. They tried alcohol or pot when they were young, tried partying with opiate pills and then before they knew it they were addicted and eventually made the switch to heroin. Or they, or a family member, were prescribed opioids from a doctor, they liked the feeling it gave them, they started misusing the pills ­and again, pretty quickly they were addicted. Once the prescription ran out and they were cut off by their family physician, they turned to buying or stealing the pills. The grabbing power of opioids is that strong, and personal pain is so great, that just like all the others I interviewed, it eventually led to heroin.

The stories I heard about the reason for switching to heroin from pain pills were often the same. It was an economic factor because as their tolerance to opioids increased and the cost of pills became too high, they couldn’t afford their habit. Someone always told them heroin was “the same” and it was cheaper and easy to get. Some started snorting it, but once they started shooting it, which they all swore they’d never do, they never turned back. They became addicted to the needle as well as the drug. Absolutely everyone I interviewed told me they would never stick a needle in their arm, yet once their addiction took over, most of them found themselves doing exactly that multiple times a day. That spoke directly to me about the power of addiction.

Over the course of the three years of production I learned a lot about the opioid epidemic, and although a lot of the interviews ended up on the cutting room floor, I was fortunate to meet and talk to many state politicians, presidential candidates, experts on addiction and people in law enforcement. Ironically every single one of them said, “We can’t arrest our way out of this.” Yet it always seemed like that was more of a sound bite than a solution. In reality it seems that although there are compassionate people looking for new ways to treat this public health crisis, the overwhelming solution is to arrest and incarcerate.

I was fortunate to meet with and film New York Times best selling author Johann Hari, author of Chasing the Scream: The First and Last Days of the War on Drugs. Johann’s Ted Talk has over five million views and his book and compassion for addicts and understanding of addiction lead him to his adoption of Dr. Bruce Alexander’s “Rat Park” experiment and his “Dislocation Theory” on Addiction. This theory helped to form the basis for my film and I feel fortunate to have been able to meet and talk to both Bruce and Johann. After all was said and done, after countless edits and hours spent crafting the story, I managed to pair it down to three main characters who were all in recovery and working to help others out of the grips of their addiction.

After premiering on PBS in New England in October of 2018, The Heroin Effect is now available on iTunes, Amazon and Google Play. The film follows Dean, Sandi, and Eric, who each battled addiction and share their journeys to long-term recovery. Also in the film is Daniel, who in the midst of a crippling heroin addiction, shares his video diary shot on his cell phone, to serve as the most personal of warnings. The film provides an honest look at our opioid epidemic from the point of view of the people who survived it and, tragically, some who didn’t.

Using a small New Hampshire community as an archetype for suburban communities across the nation that are devastated by the opioid crisis, The Heroin Effect follows people and families affected by addiction; demonstrates what successful recovery can look like; and advocates for a health care system that recognizes addiction as a treatable disease. The story is told from the lived experiences of those in recovery, those still struggling, families affected by the loss of a loved one, and the direct-to-camera honesty of someone who happens to be high on heroin. Their stories are captured in their homes and daily lives, in treatment facilities and sober homes, and from inside the confines of the barbed wire lined walls of correctional facilities.

As I write this I have to report that although I wanted the friend that I ran into at the start of this journey to be part of the film, he always said he couldn’t because of how it would affect his future if his story got out, and that he would put himself at risk of jeopardizing his career prospects. Sadly, I got the news two weeks ago that he relapsed and was found dead of an overdose just blocks away from where I ran into him that day where he told me his story of addiction, and I was inspired to create this film. He was just 30 years old.

My hope is that The Heroin Effect helps to spread awareness and shed some light on the opioid crisis that our friends, families, neighbors, communities, and our country as a whole is facing. The only way we are ever going to figure a way out of this is to change our way of thinking, as a society, and look at the roots of this crisis and how we can all help put an end it. By reducing the shame and stigma of addiction and working together with compassion we can help to promote a culture that builds people up instead of breaking them down. My goal is that the film sends a message of hope and gives a voice to the recovery movement of addicts helping addicts. Maybe someday it will just be people helping people.

Michael Venn is a director and producer whose background in music led him into the film world. He made his writing and directorial debut in 2010 with the short film “Dark Scribbles”, which premiered in the short film corner at the 2010 Festival De Cannes and was an official selection at film festivals across the country. In 2012, Michael went on to produce and co­-direct the award winning feature documentary “In Danger of Being Discovered”. Michael’s latest project is the feature documentary film “The Heroin Effect”, inspired by the opioid crisis that is currently plaguing the United States. He was nominated for a regional Emmy® at the 39th Boson/New England Emmy Awards for the PSA “It’s Time. Let’s Talk.” And most recently Michael won the New Hampshire Filmmaker of the year award at the 2017 New Hampshire Film Festival.