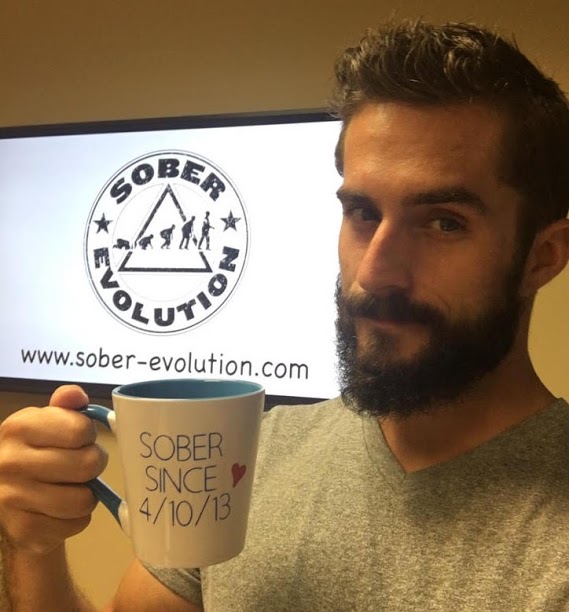 Austin Cooper, 29, of Orlando, Florida, is on a mission to help recovering alcoholics and addicts. He’s spreading positive messages as widely as he can, to those who need to hear them most.

Austin’s social media movement, Sober Evolution, is saturated with motivational quotes. It’s also home to discussions among those in the recovery community who want to support one another. Right now, he’s gearing up to travel from city to city while documenting stories of those who have achieved success after overcoming problems with alcoholism and addiction. On his rise from rock bottom, he has tried to pay it forward. He wants to give back what was so freely given to him to anyone with access to the Internet and a desire to get clean.

What was it that finally made you decide to get help?

I came to the realization that I would never live out any of my dreams unless I cut out drugs and alcohol completely. It became clear that I was unable to manage my using. My relationships were strained, and I was putting myself in danger quite often. My drinking and drug use covered up pain, guilt, resentments and responsibilities. I had to move back into my parent’s house at the age of 23 and had dropped out of college twice. I barely made it to work and could hardly afford to eat with the amount of money I was spending on drugs and alcohol. On top of that, my health wasn’t great, and I was barely sleeping due to fear unless I drank myself until I passed out. I was beyond miserable and constantly had suicidal thoughts.

What kind of help or treatment proved to ultimately be most effective for your successful entry into continuous recovery?

I started out at a treatment center for 22 days. There, I listened closely to those who had what I wanted in life—sobriety, happiness, financial security, knowledge and wisdom. I was told to go to AA each day for 90 days, so I did that right out of treatment. The principles and steps I learned there helped me organize my thoughts. In “the rooms,” I met people who were able to create the professional and social lives they wanted after getting clean and sober. I realized that I could use those same principles to build my life in other areas. I decided to become an entrepreneur, and live the rest of my life working for myself. So I clung on to business mentors and coaches. That became part of my program. I’m still clinging.

What’s have the most difficult things to deal with been while living “life on life’s terms?”

I realized that I had to discontinue some of my friendships, which was tough. But I was determined to never pick up again, and those friends still did. Also, when anyone makes me angry, I sometimes think, just for an instant, that I should drink. That would make them regret making me angry! Fortunately, I can quickly step back and realize how ridiculous that sounds. Lastly, if I’m out on a date and the girl asks me what I want to drink, that can be difficult. But I never come close to picking up. Nothing is worth taking me back to rock bottom.

What exactly is Sober Evolution and how does it work?

I started Sober Evolution as an Instagram account a little over a year ago. It began in order to share some of the quotes that have helped motivate me to land where I am now. I believe that everything that has happened in life and everything I experience today is a learning experience, not just a problem. I try to use each of those learning experiences to build a better and a smarter life. That’s where my desire to start Sober Evolution came from—I wanted to share this mindset with others. When it began to grow as a social media movement, I decided to start selling shirts that signified strength within the recovery world.

I want people who are struggling with addiction to see that it is okay to reach out for help. It is actually a cool thing to be part of such an incredible group of people! I have since started a private Facebook group, which has been helping people grow their support systems with others around the world. I have plans with some amazing people to create events, the proceeds of which will go towards funding treatment scholarships for those who don’t have insurance and who can’t afford treatment.

Where did that initial inspiration to start Sober Evolution come from?

A group called @DoingItSober on Instagram. I saw people having fun and enjoying life within sobriety. That helped me see the cool side of recovery from the viewpoint of an app. I knew I wanted to bring the same thing to others, as well. In recovery, I came across a lot of entrepreneurs, and that inspired me to go for my dreams. And it inspired me to pay that forward if I made it. I believe socializing in-person is the best way of going about recovery, because of the personal aspects which brings more accountability into play. But social media adds many more people and stories into our lives than meeting with people face to face ever could. Social media brings people together from around the world, and it allows those who live in more secluded areas to socialize.

I heard a rumor that even though you’re a social media savvy guy,  you still love the library.

I love that I have the ability to go to the library and figure out how to accomplish anything! If I want to travel the world for the rest of my life, there is a wealth of knowledge within libraries which can tell me a million ways to do so.

We hear a lot about how recovery presents unique and specific challenges and opportunities for women, but what about men?

If you could create your own slogan to be used for generations, what would it be?