Home > Blog > Sober in the City: My Beach Vacation, No Beer Required Sober in the City: My Beach Vacation, No Beer Required

How to Stay Sober on Vacation

As much as I love New York City, I love getting away from it, too. Last week, I traded 30 degrees on the East Coast for 80 degrees in Mexico. I even set a sassy auto-reply for my email account: “Soaking up the sun and binge drinking virgin cocktails in Mexico.” And binge drink virgin cocktails, I did. I drank my weight in Mexican Coke and limonadas – no hangovers, no blackouts.In Mexico, I spent time with my aunt, her wife, and their awesome friends as we camped at Rancho Grande on Gonzaga Bay. We paddle boarded, cooked, and enjoyed each other’s company. I even had a little “spring fling.” And oh, he was the best! Gunner had lost most of his teeth, so his tongue hangs out of his mouth most of the time, but he was just the sweetest, tiniest, 13-year-old Chihuahua. We were inseparable for most of the trip. 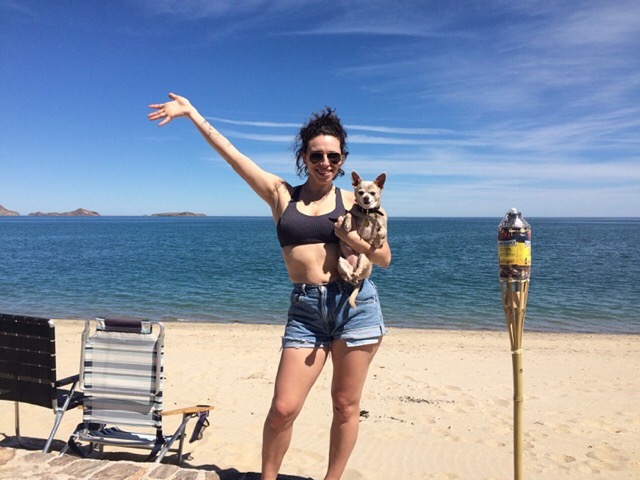 Gonzaga Bay had one of the most beautiful sunsets I’d ever seen. The sky went from sunny, to shades of pink, orange, and blue, to a solid blue. When it was blue, the ocean met the sky. Sometimes I’d look at the sunset and think about honking taxis, skyscrapers, subways, and overpriced smoothies. How can two places that are polar opposites exist on the same planet?

I’d be lying if I said that I didn’t think about alcohol on the trip. The first time my toes hit the sand, I thought, damn, it would be really nice to have a beer right now. I’d even get the occasional beach-themed country song in my head. Ya know, something like “No Shoes, No Shirt, No Problem” by Kenny Chesney (Can you tell I grew up in Texas?). Thankfully, those pseudo beer cravings were fleeting. Sobriety never surprises me, though. It’s interesting to see what can trigger a craving and how quickly I can say no to it. It’s difficult from time to time, but I’ve truly grown to love my life without alcohol.

Vacations used to be one of my myriad excuses to get drunk. Honestly, anything was an excuse to get drunk. Binge drinking on vacation meant jumping head first into some pretty risky behaviors, most of which I would not remember (nor was I proud of them). This sober vacation encouraged me to connect with people and experiences on a deeper level. I was present for each and every conversation, and now I have vivid memories of the warm sunshine on my skin, the sand squishing between my toes, the sound of my aunt’s laughter, and Gunner’s sweet doggy kisses on my cheek.

A week in Mexico was just what the doctor ordered. Seriously… my therapist was like “Girl, you need a vacation.” I wish I could have bottled up the carefree feeling that was the byproduct of fresh air and no wifi. I was, however, able to bring back some seashells, a sand dollar, and a some sweet tan lines. A tan New Yorker stands out – especially in the early Spring. Now I’m the weird girl in New York City with a tan, paying way too much for a smoothie.