Home > Blog > Subutex, Suboxone, and the History of Buprenorphine Subutex, Suboxone, and the History of Buprenorphine

Subutex, Suboxone, and buprenorphine, oh my! What do all these names mean?

We recently answered some questions about Suboxone. But we left one off the list. What is Subutex? How is it different that Suboxone? And why aren’t we hearing about it anymore?

The short answer? Subutex was a sublingual form of buprenorphine made by the company that manufactures Suboxone now. Let’s look at Subutex, Suboxone, and the evolution of buprenorphine:

The History Of Buprenorphine

Buprenorphine, sometimes called bupes on the street, was discovered in 1966, at a home products company Reckitt and Colman. They believed that “opioids with structures substantially more complex than morphine could selectively retain the desirable actions whilst shedding the undesirable side effects,” and their main goal was to find such an opioid. They had two failed attempts before finally putting buprenorphine into clinical studies. When presented at major conferences, buprenorphine was attractive to many pharmacologists because it was seen as an effective pain killer that didn’t have a high abuse potential, and it also had potential as a drug treatment for narcotic addiction. Despite this realization it took almost three decades for it to be used therapeutically.

The bottom line: Buprenorphine was discovered in 1966 as an alternative to morphine with potential to treat narcotic addiction. It took 30 years to put this potential into practice.

This sublingual form of buprenorphine was manufactured by Reckitt and was released in 1995, first in France, in response to the AIDS epidemic among heroin injection users. In 2002, it received FDA approval in the United States. Subutex contains just buprenorphine, so it was prone to diversion. By 2012, Reckitt would cease the production of Subutex (not for safety reasons).

The bottom line: Subutex was a sublingual brand name form of buprenorphine, designed to treat heroin addiction. It had high abuse potential.

In 1993, the National Institute on Drug Abuse approached Reckitt about developing a combination tablet that could help prevent the problem of buprenorphine and methadone diversion. In 2002, Suboxone, the response to the request, received FDA approval. Suboxone contains both buprenorphine and naloxone, a full agonist that can help prevent users from injecting Suboxone to get high.

The bottom line: Suboxone is buprenorphine with an ingredient added that limits abuse potential. It is currently the gold standard of medication-assisted treatment.

Always take in conjunction with counseling & psychosocial support. See below for our recommended Gold Standard of Care. 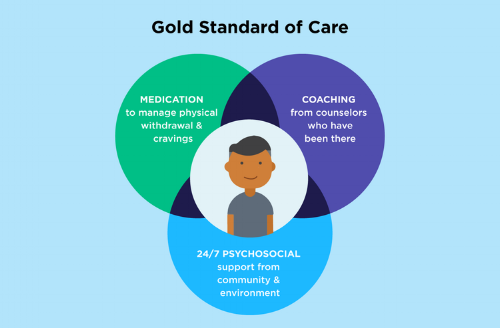 Jai Ahluwalia is an undergraduate at the University of Michigan studying Biology and Economics. He is passionate about making science easier to understand and believes that access to this information can have a positive impact on the recovery process.