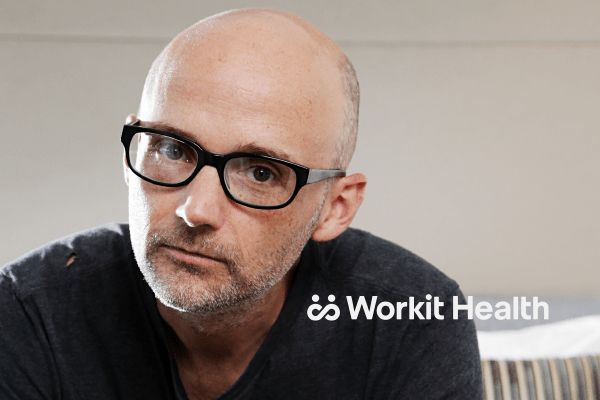 Moby on Addiction, Sobriety, and Surrender

An Interview about Moby’s Sobriety: The Addiction of a Musician, Photographer, and Activist

You can’t be operating in this universe and not be aware of Moby – the musician, photographer and animal rights activist, who burst into the cultural stratosphere in the 90s with his unique electronic dance music. While he came clean about his entire life in his memoir Porcelain, which was released last year, I was able to interview him all his addiction and sobriety. (He’s now been sober over 15 years.) Here are some of the choicest bits:

When did you first get sober?

During those years, in the back of your head, did you know you had a problem?

No. I just felt I was an enthusiast. If people said, “I think you might have a drinking problem,” I would say, “No, I just love it.” But I love puppies and still I never missed work and compromised my health and friendship to play with dogs. Yet every time I drank, I couldn’t have fewer than ten drinks.

Then how did you not realize you had a problem?

When I was growing up, an alcoholic was someone who drank every day from the time they woke up to the time they went to sleep and they were getting in car accidents and they couldn’t hold down a job and they had cirrhosis of the liver. But then I started to see…about two or three years before I finally got sober, I started to try and practice moderation and I simply couldn’t do it and that was the first time I realized that I had a real problem.

How do you balance the tradition of anonymity with wanting people to know about recovery?

I am perfectly happy talking about addiction, sobriety and 12-step programs, but I also understand the value of the tradition about being anonymous because if I go out in public and talk about being a part of AA and the next day I relapse, it hurts AA. But I also want to be of service and so it’s tricky. So I guess I don’t know the best way to approach it—whether it’s to be a flag-waving member of a 12-step program or just keep the focus on myself and not worry too much.

What are your thoughts on drinking now?

I had this really nice realization: when I hear people say, “I just wish I could go out and have two glasses of wine,” I realize I never had any interest in having two glasses of wine. I wanted 15 drinks and a bag of shady cocaine, and I wanted to stay up until odd hours just staying drunk and stupid with no consequences. Two glasses of wine at dinner is offensive to me. I wanted chaos and destruction without a hangover.

When I got sober, I started noticing that some people would only half finish a drink or someone would order a beer and it would get warm during dinner and that was when I realized that very few people have the relationship to alcohol that I do. I was myopic: all I cared about if I walked into bar or party was the music, how many women were there and where the bar was, but in the opposite order: first find the bar and order two drinks.

One of the major things alcoholics have to work on is surrender. How do you do that?

I can have preferences, but there is so much evidence in my life of things that I desperately wanted to happen that did happen and they were terrible things and things that I desperately wanted to happen, but didn’t happen and that ended up being for the best. A really remarkable change happens when you actually completely hand something over that you truly care about.

Anna David is the New York Times-bestselling author of six books. She’s been published in The New York Times, The LA Times, Details, Playboy and Women’s Health, among many others, and has appeared repeatedly on The Today Show, Hannity, Attack of the Show, Dr. Drew, Red Eye, The Talk and many other programs on Fox News, NBC, CBS, MTV, VH1 and E. Anna is the Editor of AfterPartyMagazine and a speaker and coach on relationships, addiction and recovery.

Sober in the City: Yoga is Not a Cure-All, But It Helps