Home > Blog > Michigan And The Opioid Crisis: The Scope Of An Epidemic Michigan And The Opioid Crisis: The Scope Of An Epidemic

Michigan is in the midst of an opioid epidemic. We look at the statistics behind the staggering crisis.

It’s not news that the United States is in the grips of an opioid epidemic. In fact, it’s almost impossible to avoid reading or hearing about it. In July, a White House panel asked President Trump to declare the epidemic a “national health emergency,” citing the statistic that 142 Americans die every day due to opioid overdoses.

Everywhere you look, news stories and headlines announce the latest scandals: pill mills, doctors over-prescribing pain meds, parents overdosing with their children in their car, even veterinarians having to monitor pets’ owners for abuse of pain medication. It’s hard to wrap your head around the scope of it all. And Michigan, like every state, has been hit hard by the epidemic.

First, back to the big picture. The CDC names three main types of opioids currently in use in the United States: prescription opioid painkillers (such as hydrocodone and oxycontin), fentanyl and heroin. Fentanyl is a powerful synthetic opioid: it’s up to 100 times more powerful than morphine. Frighteningly, now emerging are super strong variations, like carfentanil, a lab-created elephant-tranquilizer 100 times more powerful than fentanyl.

The opioid epidemic differs in one crucial way from other illegal drug epidemics – it often starts with the perfectly legal prescribing of painkillers. So how do we get from legal prescriptions to an all-out epidemic? Well, for starters, it’s a question of volume. The United States makes up about 5% of the world’s population, yet we consume 80 percent of the world’s production of prescription painkillers.

According to the National Institute on Drug Abuse, young adults between the ages of 18 and 25 are the biggest abusers of prescription drugs, including opioids. And a 2016 study indicated that 80 percent of heroin users started out using prescription opioids.

The Crisis in Numbers 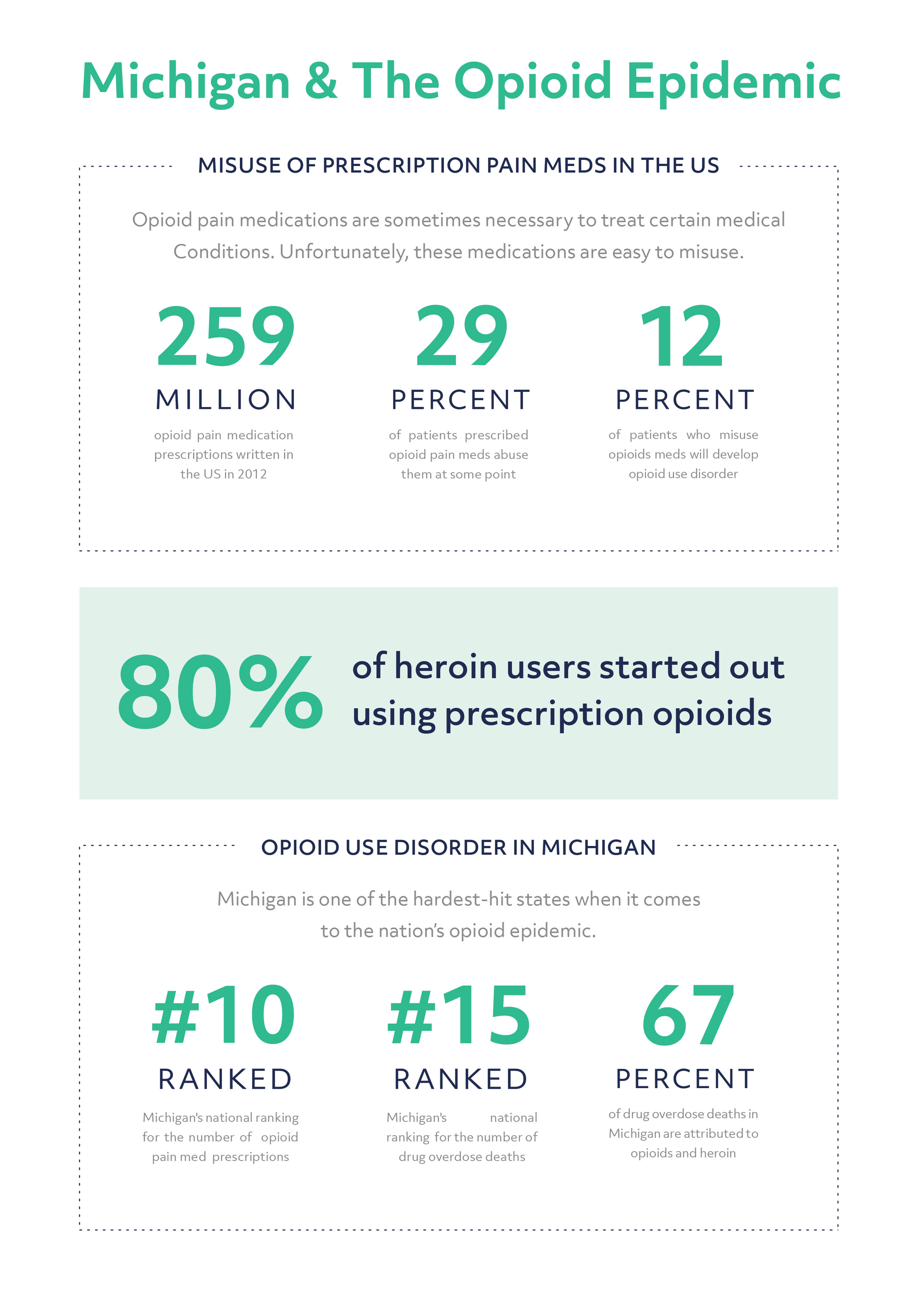 Michigan is one of the states hardest hit by the opioid epidemic. Like many states, it has seen a huge uptick in recent years in both the number of opioid prescriptions written and the number of overdoses due to opioid abuse and/or heroin use. According to the Michigan Department of Health and Human Services, 1,257 Michiganders lost their lives to opioids in 2015, the most recent year for which comprehensive data is available. Between 2010 and 2015, the counties seeing the highest number of overdoses were Wayne, Macomb, Genessee and Kent.

The numbers alone can’t do justice to the tragedy the community is suffering with each loss. Patrick Steinhebel’s body sat at the Wayne County morgue for a month as his family suffered, without notification of his death by overdose. Only after they filed a missing person’s report did they receive notice that he had passed. In August, police raided a Dearborn pill mill. Before the pill mill was shut down, it acted as a disruptor to the community, with lines out the door and patients coming and going at all hours. It’s estimated that about half of the 500,000 pills prescribed at the mill in January ended up on Michigan streets.

Employers are even being hit by the epidemic, as they struggle to find and keep sober staff. Skilled labor is especially difficult to find, as workers can’t operate heavy machinery while intoxicated. New hires often aren’t able to pass drug tests. Employees may turn to opioids for relief from injuries caused by taxing physical work, only to struggle with addiction once taking powerful narcotics. This results in jobs lost, and the cycle begins again.

A 2012 CDC study placed Michigan 10th in the nation for prescribing opioid pain relievers, at a rate of 107 prescriptions per 100,000 people. And the CDC ranks Michigan 15th in nation for drug overdose deaths. This’ll give you an idea of the epidemic’s growth: according to the Michigan Department of Health and Human Services, in 1999 only 22 percent of the state’s drug overdose deaths were contributed to opioids and heroin abuse. By 2015, it was up to 67 percent.

According to MLive, Michigan’s most populated counties register the highest number of opioid prescriptions, with Wayne, Macomb and Genessee county topping the list. But when we look at the number of prescriptions per capita, the numbers change and smaller counties are harder hit. For example, Bay County is highest with 19,365 prescriptions per 10,000 residents, followed by Iosco and Montmorency counties.

When it comes to opioid deaths, again the numbers are highest in the most densely populated counties – Wayne, Macomb and Genessee. Adjust for population size and the highest percentages are seen in more rural, less populated areas like Muskegon, Shiawassee and Macomb counties. Rural areas often struggle with fewer resources to handle the opioid crisis, as well.

As in other states, the opioid crisis has changed the lives of many, and not just drug users and their families. Doctors, police officers, firefighters, teachers, EMTs and school nurses are all affected and have to be more prepared than before. But this also means that Michigan is poised to serve as proving grounds for change. The voices are ready, people are adapting and rising to the challenge, and in the next three parts of this series we’ll hear from some of the people on the front lines of Michigan’s opioid epidemic.