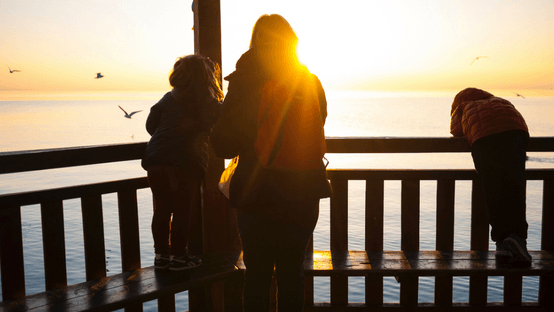 The Isolation of Parenting Created this Perfect Bubble of Despair

It meant drinking, alone, in rapidly increasing amounts, for the first three years of my children’s lives. It meant sickness, and fear and insomnia and anxiety and depression and weight gain and age… and eventually, liver and kidney pain. It meant hiding vodka bottles in my closet and laundry room. It meant suicidal thoughts on a daily basis. It meant insanity.

(Read – Confessions of an Alcoholic Mom, Part I: Motherhood and Alcoholism)

The craziest thing about insanity is that, most of the time, we don’t know it’s happening. Of course, there might be an occasional twinge about all the drama and odd behavior, but mostly? We stay unaware. Because, really? Who would want to know?

I going to own the insanity here. When I was in my worst stage of addiction, I still attempted to rationalize my drinking. I wanted, in essence, to spot the raving beast in the distance coming for me and yet say, “Well, would you look at that. Yep. That’s a man-eater for sure. But, I’m sure he’ll go right past me once he finds me.”

(Read – Is Your Wine Habit Becoming An Addiction?)

The raving beast did not amble past. And, finally, when my sons were very young, I fully realized the horrible entrapment that is alcoholism: I couldn’t stop drinking. And, I couldn’t NOT keep drinking. Either way, I felt I would die.

So, how did I finally get my sanity back?

It’s a process that still continues today. It’s sort of like surgery, but it’s the kind that involves post-op rehab for the rest of your life. Fortunately, the rehab, while challenging, has a stellar insurance plan: a happy, joyous, and free life.

When I was a kid, I loved the Little House on the Prairie books. They were so very rugged and outdoorsey, so very, very different from my own life. But, I do remember feeling a bit sorry for Ma. She kept having to trek to whatever pace Pa decides to set. There was no end to his wanderlust. She would have to pack up the wagon and head out to endless challenges. Wolves. Hardtack (whatever that is). Cranky natives. And, to make things worse, often the travels had no definite end point in mind; Charles would know it when he saw it. Too bad for Ma, I don’t think there was marital counseling back then.

Ma Wilder’s life is kind of how I viewed getting sober. It would be a hard and harrowing journey, with no real end point. Just long days and scary nights, possibly stuck with an annoyingly enthusiastic leader,  your sponsor.

I am no Caroline Wilder. I would have been whining from the first day out on that prairie. The prairie is hot. There’s killer grasshoppers. And, I can’t eat rabbit – it’s not vegan. I am a complete wimp. And so, when I look back to those early days of recovery, I am rather amazed at my pioneering spirit. I could only take the fewest possessions. Myself. My hope. And a much simpler life. Sobriety whittles down at you, forcing you to collect only the most valuable tools for the long journey to keep you alive.

My first weeks of no wine found me looking at time in a new way.

I would actually set a timer, some days, for thirty minutes, and decide that if I wanted to drink at the end of those minutes, I would. I would pair this strategy with my newfound talisman, the serenity prayer. I also had to finally figure out what I enjoyed doing, which took a while. When all you do is drink and exist, fun hobbies get dusty. I managed to find a few and kept them ready for the itchy times. I would divert myself enough with a walk, or some chocolate, or, quite surprisingly, knitting. I endlessly searched out laughter, piling up my Youtube subscriptions with Seinfeld outtakes and cat videos. My bedside was stacked with every recovery memoir I could find. I developed a sparkling water and fresh basil “mocktail” for 5pm. When I was drinking, I never had the patience for mixed drinks, but now, it seems I had become quite the mixologist. All of these became part of my “Stay Sober Rituals.” They let my brain look elsewhere, if for only thirty minutes, for peace. In so doing, I rebuilt the synapses. Slowly.

There were times though, of course, when the thirty minutes would buzz at me, and I would know the despair of still wanting a tumbler full of cheap wine. It was at moments like these that I fought for my recovery with the one thing I initially feared the most: a twelve step group. I had dreaded the idea of attending meetings, but when I finally found the courage to attend one, I was amazed. These people, from so many different walks of life than mine, were mypeople. Each meeting helped me file away more tools to help me do this whole sober thing, day by day. I didn’t have to go it alone.

Most days in early sobriety for me felt like a long yoga session. There was lots of deep breathing, slow movement, all the while trying to twist myself into the shape of a human pretzel. I was awkward. I wobbled a lot. But I was learning, finally, that I was worth the effort.

Dana Bowman is a wife, a mother, a teacher, a writer, a speaker, and a runner, all simultaneously. The writing is only possible because her family donates loads of material. An English teacher for over twenty years, she decided to take up a writing career while mothering two babies, because she had so much free time. Her writing has been awarded first prize from both the Evangelical Press Association and the Associated Church Press. Her book was selected as a Kansas Notable book in 2016.  She was thrilled to be asked by Central Recovery Press to write a book about moms in recovery. Bottled: A Mom’s Guide to Early Recovery, available now on Amazon, took exactly nine months to write. It is her third baby. It is much less demanding.