Home > Blog > What’s this About Vaping Being Dangerous? Your Questions, Answered What’s this About Vaping Being Dangerous? Your Questions, Answered

Recent cases of severe lung disease in several states have been linked to vaping. Here’s what we know and don’t know about the vaping-related illness and how you can reduce your risk.

The Centers for Disease Control and Prevention (CDC) and state health departments are investigating almost 300 cases of severe lung disease across 23 states that have occurred this summer (NOTE: New cases are being reported daily and this number is likely outdated by the time you read it). While there have been cases in people as old as 72 in North Carolina, the average age of those afflicted with this severe lung disease matches the age range where vaping is most popular: teens and young adults.

Symptoms of this severe lung disease include coughing, shortness of breath, pain in the chest and vomiting. In severe cases, patients have developed eosinophilic pneumonia, a type of pneumonia where immune cells called eosinophils, which are also involved in allergies and asthma, accumulate in the lungs. Patients with eosinophilic pneumonia have had to be put in a medically-induced coma. Unfortunately, one patient has died in Illinois due to lung disease believed to be linked to vaping. 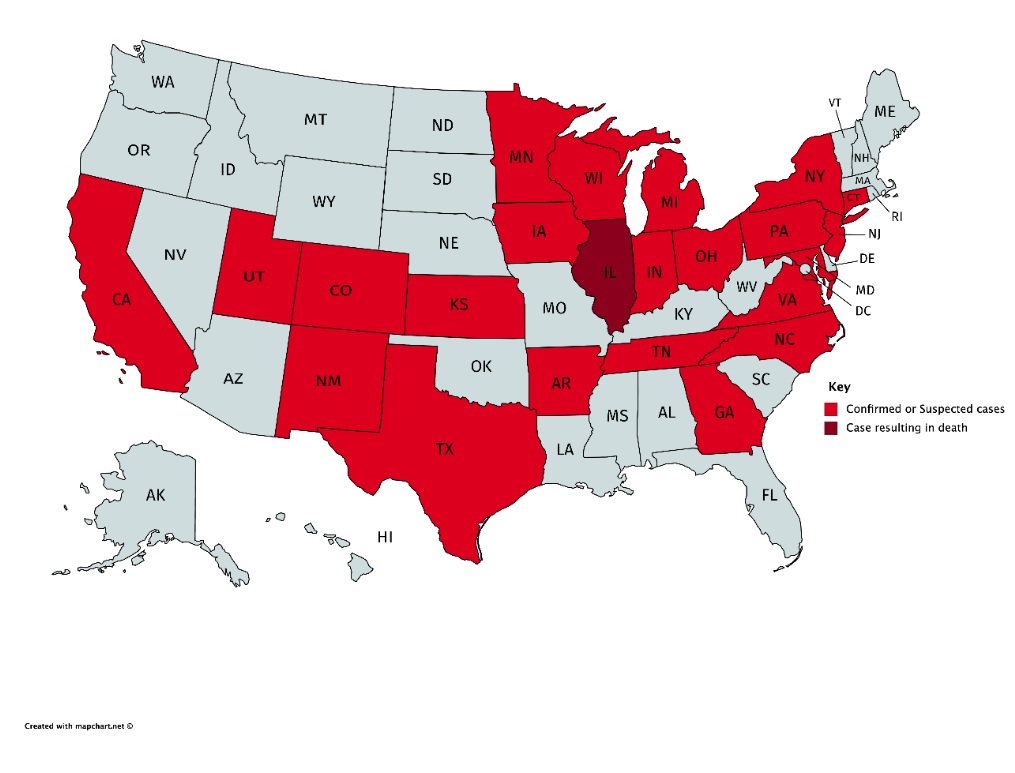 What do we know so far?

Severe lung disease in young people is a rare occurrence and reports of such cases, including 30 in Wisconsin where state health officials have named it “severe chemical pneumonia”, began coming in late June 2019. Before that, only two cases of severe lung disease, acute eosinophilic pneumonia to be precise, were reported in the medical literature. Like with all cases of strange illness, medical and public health professionals began looking for the possible causes of lung disease patients who had otherwise been healthy. The common thread throughout: vaping.

It is important to note that this information is coming from surveillance, not scientific experiment. While we cannot yet establish causality between vaping and these cases of lung disease, nor do we know the biochemical underpinnings of the relationship, we can see a correlation. (Causality vs correlation is a confusing subject, so here’s a good explanation from Sal Khan.) You will likely hear people claim that “They can’t prove that vaping causes this disease,” and while that is a fair assertion, it also misses the point. The CDC and other health leaders are warning the public about vaping and its potential connection to these cases of lung disease because they have strong evidence that the two are connected. It is important to remember that for years big tobacco companies fought government regulation by saying “They can’t prove that smoking causes lung cancer” (they can) and that some people, even scientists, still believe that HIV doesn’t cause AIDS (it does).

What could be causing the severe lung disease?

Vaping and e-cigarettes are a diverse set of products and it remains unclear whether all or just some products are causing these cases of lung disease. It seems that many afflicted patients were vaping liquid that contained THC, however, cases have also been reported where the liquid contained nicotine. Health leaders are beginning to suspect that contaminants or the type of solvent used in the vape liquid may be to blame. A solvent is what the active ingredients of the vape liquid, such as flavoring, nicotine and THC, are dissolved in. Of particular concern are black market or homemade vape liquids which can be made with toxic solvents mislabeled as safer ones. This is why it is highly recommended that people who vape do not consume products made at home or sold on the streets.

Even vape products sold in stores may not be free of toxins. The e-cigarette industry is unregulated by the FDA and previous studies have shown that potentially dangerous chemicals can show up in the vapor of certain flavored vape liquids. One particularly concerning chemical, diacetyl, was actually banned as an additive in microwave popcorn after workers in an Omaha factory came down with a fatal lung disease called bronchiolitis obliterans, also known as “popcorn lung” from inhaling diacetyl that was being used in the butter flavoring. A 2015 Harvard study found that out of 51 flavored vape liquids, 39 had diacetyl in their vapor. What’s more, it wasn’t just buttery flavors that contained diacetyl but fruit, candy and cocktail flavors as well. Another potentially hazardous chemical found in e-cigarette vapor is formaldehyde which is known to cause illness ranging from migraines to cancer. While no study to date has linked diacetyl or formaldehyde in e-cigarette vapor to illness, some consumers may rightfully want to avoid these chemicals. Because vape products are unregulated, manufacturers are under no obligation to remove these chemicals or to let their customers know what they are putting in their bodies. One expert said vaping was like inhaling a chemistry experiment into your lungs.

So, what can you do to protect yourself?

If you vape, regardless of what product you use, you should speak with your doctor or other healthcare provider. They can help you better evaluate your risk and help you quit vaping if that is what you choose to do. If your vape product(s) of choice contain nicotine, their are FDA-approved medications such as nicotine replacement therapy, Zyban (buproprion) and Chantix (Varenicline) that can help combat cravings to make quiting easier. The Truth Initiative has also expanded their tobacco quit program to include tools to help young people quit vaping. For those who vape, this recent news of severe illness and death is likely very scary. Vaping, even with products that contain no nicotine or THC, is an addictive habit. However, you can beat vaping addiction and live a happy, healthy life.